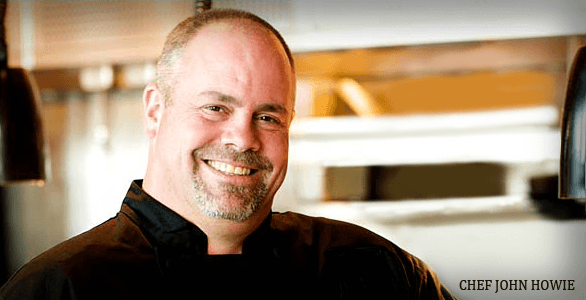 Chef John Howie is widely recognized as the foremost expert on plank cooking, the time-honored Northwest Native American method of roasting fish, meats and fowl on cedar planks. He is the author of “The Cedar Plank Cookbook” and “The Plank Cookbook”. Chef Howie has five Award Winning Restaurants in the Puget Sound region. Seastar Restaurant & Raw Bar in Bellevue, and in Seattle. Beardslee Public House, Wildwood Spirits Co, and his name sake John Howie Steak. He has recently authored “Passion & Palate” a beautiful cookbook filled with stories, recipes, and beautiful photography, including over 240 recipes. He has appeared on Martha Stewart Living Television, CBS Early Morning Show, Food Network’s “Best Of,” the Food Channel’s United Tastes of America with Chef Jeffrey Saad, and Rick Browne’s Barbeque America.

Cedar and Alder plank cooking was created by Northwest Native Americans. They would tie fish and game to large Western red cedar or alder planks. They would then place the planks around open fires, and the residual heat from the fire would cook the fish or game.

This cooking procedure was done for hundreds of years, more out of a necessity for a cooking surface than anything else.

In the late 1990’s I started experimenting with cooking planks. While developing the menu for Palisade Restaurant I was introduced to baking planks. I was intrigued by this method of cooking as it gave us a tie to the Northwest Native Americans and was a simple yet flavorful and healthy way to cook.

Salmon was the first recipe I created for plank cooking. Chef Garrett Cho and I worked on perfecting a great salmon recipe which we eventually placed on the opening menu for Palisade-it quickly became one of the bestselling entrées. 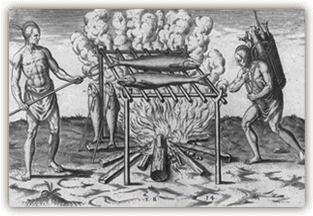 Soon after that I asked my step-father, Phil Bagwill if he’d make cedar planks for me to use. He did, and in so doing started a business for himself selling baking and BBQ planks to specialty and food stores. Phil came to me and asked me to create a cookbook for him. So my family and I ate from cedar and alder baking planks for months, until I had enough great recipes to make the Cedar Plank Cookbook-or the blue cookbook as we call it.

I also started experimenting with BBQ Planks, and within another year I had the Plankcooking Cookbook (or the green cookbook). It includes recipes specifically designed for Alder Baking Planks, Cedar BBQ Planks, as well as Cedar Baking Planks.

Baking Planks – The benefits of using baking planks are many. They impart subtle wood flavors, and they maintain the natural juices in the meats and vegetables that are cooked on the plank, making for moist flavorful foods. They are easy to use and because they maintain the natural moisture you don’t need to add other fats, such as butter; but of course you still can if you want. Our baking planks come in two different woods-both Western red cedar and alder. The cedar is a little more aromatic and adds a stronger woodsy flavor to the foods that are cooked on it. The alder is milder and sweeter, with a very subtle flavor.

The baking planks are designed to be used in your home oven. They are made to be used repeatedly for years to come. Using 1 ½” thick kiln-dried wood, the center of the plank is routed out to form a cooking surface. Then we drill two holes through the plank on each end, and place a metal bolt running through the holes with a knot on each end. This is done to help keep the plank from cracking; or if it does crack to help hold it together so it can be used for years.

BBQ Planks – Have similar benefits to that of the baking plank, in addition the BBQ planks add incredible flavor to the foods cooked on them-from the woodsy flavored cedar oils to the rich smoke from the charred edges and bottom. They, too, maintain natural moisture in the foods cooked on them. Our BBQ planks are made from clear Western red cedar. BBQ planks are designed to be used on your BBQ and are intended to be used one time.

Before using your plank for the first time it is best to oil the entire plank with an inexpensive vegetable oil. Using a paper towel, rub oil over the entire plank front, back, sides, and the cooking surface. Remove any excess oil with a clean paper towel. You only need to oil the plank once. The oil will help maintain the beauty of the natural woods and keep it from staining. After oiling it is ready for use.

Baking planks never need to be soaked in water. They are to be used in your home oven. The oven should always be pre-heated to between 375° to 425º depending on the recipe. You will always use the oven in baking mode, never on the broiler. The plank should always be placed in the center of the oven on the metal rack. If your plank has a slight crack, it can be placed on a cookie sheet to ensure none of the juices flow onto the oven's surface. It is best to use a conventional oven. A convection oven can be used, but the whirling hot air can lead to a splitting or cracking of the plank.

After use, baking planks should be washed with warm water and dish soap. I like to use the orange and yellow Tuffy™ pad to remove any baked on juices or seasoning. Rinse with hot water and let the plank air dry. Place in a dry cupboard until next use.

Before using your BBQ planks they must be soaked through completely. This can be done by placing them in a 2” deep baking pan. Then cover them with water. Place a paper weight or a coffee cup filled with water on top of the planks to keep them submerged. The planks will be sufficiently soaked in approximately 1-1 ½ hours, but can continue to soak as long as you want until you are ready to use them.

BBQ Planks are best for gas BBQ grills. The wood adds flavor and the BBQ planks will char on the bottom and smoke adding a great smoke flavor, too. Pre-heat your gas grill on high for 5-10 minutes until red hot. Remove the planks from the water and pat dry with a paper towel. Place the fish, meat, or other items on the plank, leaving room around the edges and in-between the items so they will cook evenly.

When the food has finished cooking the planks will be completely charred on the bottom side, with an un-charred top side except around the edges. If the planks are heavily charred remove carefully from the grill with a pair of strong tongs and a metal spatula to ensure the plank is stable. Place the planks on a cookie sheet and serve directly from the plank, or remove the food from the planks, place on a serving tray, and serve.

BBQ Planks can be used on a charcoal grill if desired. The charcoal fire should be turning gray and no flames should be evident before proceeding to cook with the planks.

If used properly…BBQ planks are made to be used once and discarded, although some people claim they have used them several times before needing to discard, while others say they break them up and use with the charcoal the next time they BBQ.

Why do the baking planks help keep moisture in the foods that are cooked on them? When you bake on a glass, porcelain, or metal dish, that dish conducts heat and becomes the same temperature as the oven it's in. The planks don’t conduct heat so the foods roast from the top, but never cook from the bottom. That is why you never see any burnt juices on the bottom of a plank like you do with pans that conduct heat; all the natural juices stay inside the foods.

Can I use my baking plank on the BBQ grill? Sure you can…I don’t recommend it, as it is much more difficult to maintain the proper heat levels, and it is possible that you could catch your expensive baking plank on fire. Just use the BBQ planks-they are easy and cheap.

Do I need separate baking planks for fish, meat, vegetables, or dessert recipes? No, you really only need one plank for any of these things. You may need two or more if you want to cook for several people. But the natural oils in the plank don’t allow it to absorb flavors, so you can use the same plank for salmon as you would for the apple dessert-just be sure to clean the plank properly between uses.

Why can’t I just use a cedar roofing shake, or a cedar fence board to cook on? You probably could, but there are problems with some of these options. First, you need to make sure that the wood has never been chemically treated-you could poison someone. Second, the cedar shakes and fence boards are not the exact size you need. Shakes are thin on one end and thick on the other, and make for an uneven cooking. The fence boards are too thick. The BBQ planks have been designed to allow enough heat to come through to cook the food properly without burning through.